Lazar Angelov is a fitness model, personal trainer, celebrity figure and entrepreneur. He was born in Sofia, Bulgaria in 1984. Before becoming a fitness icon, he was a professional basketball player. At the age of 16 he made the junior national team and soon he was the leading scorer of his pro teams in the National Basketball Association of Bulgaria. At the age of 18 he spent an year and a half in the Army, where he found bodybuilding.

It became a constant part of his life and his second chance in life since a serious knee injury put his basketball career in jeopardy. He went on to earn a certificate for a personal trainer from the National Sports Academy and started working as a personal trainer. His ability to motivate allowed him to not only help people transform their bodies, but also do the same with their lives. 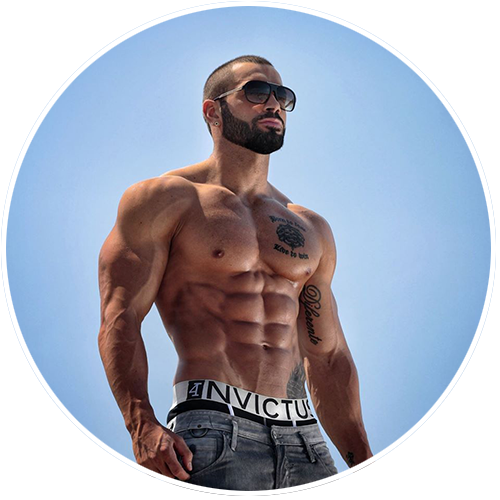 Lazar dedicated his life to bodybuilding and since 2006 took part in different competitions, getting on the podium of every competition he took part in. His balanced physique and definition gave him an edge every time. Having some of the best abs in the world also helped. Not only that, through his iconic abs and beard he was able to gain a massive social media following and become the most recognizable fitness figure in the world.

Millions of people rely on him for daily motivation and advice. He was on the cover of Men’s Health and other magazines in numerous countries. Due to the thousands of questions and inquiries about his everyday workout routine and diet, he decided to create his personal website – lazarangelov.com, where he could work with people on a global level and help them pursue and accomplish their goals. Still, Lazar maintains an out-of-the-box character, which goes beyond the fitness model label. He would create entertaining and fun content about everyday situations or anything outside the gym as well.

As time went by, his social media channels grew (currently around 15 million on FB and 6 million on IG) and people’s attention and need for more information lead him to writing his first book – “ABS: The Secret Revealed”. Lazar also started a lifestyle clothing brand called 4invictus and a sportswear brand called Dedicated Division. Along with the personal programs on his website he created the more affordable LA Diet, his workout app – LA Fitness Academy and a 90-day transformation challenge called EAST MODE. Lazar was also able to establish and open a gym chain called LA7, with branches in Egypt and soon in Dubai. He is currently enjoying traveling around the world and visiting different countries, where he is always happy to meet people who he’s helped or inspired.

Any cookies that may not be particularly necessary for the website to function and is used specifically to collect user personal data via analytics, ads, other embedded contents are termed as non-necessary cookies. It is mandatory to procure user consent prior to running these cookies on your website.